Written by Bill Balvanz
Updated over a week ago

On April 20, 2020, Voyant will make product updates to the Atlas customer lifecycle management portal to include new features that enhance user functionality and and improve user experience.

In Atlas, all carrier names listed within the Management tab for DID Inventory will be converted to Inteliquent, Bring Your Own DID (BYODID) or Toll Free dependent of the telephone number. This will help keep the DID inventory more manageable by listing the assigned carrier ownership.

In conjunction with supporting two DID options for carrier names, restrictions will be put in place to help alleviate any issues with bad numbers that are incorrectly swapped in and then get used later in orders. When a DID is swapped in for another DID, the following steps will be taken:

These same restrictions and automatic carrier name settings will also apply to importing numbers in Atlas DID Management. When importing numbers, the carrier selection fields have been removed. Only the DIDs, State, Rate Center, LATA and status are required. 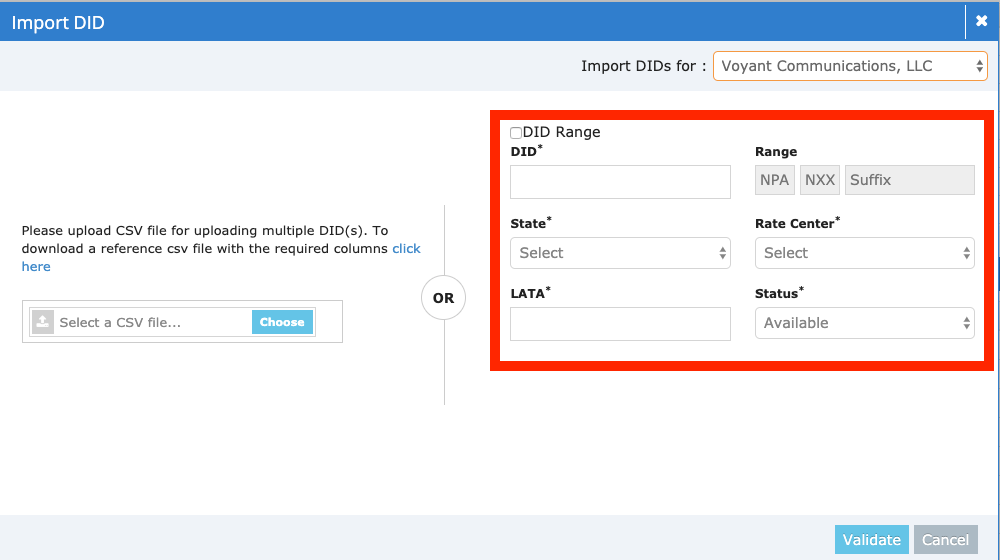 This also applies to the CSV import option when importing larger amounts of DIDs. Download the new template from the “click here” link as the template has recently changed. Each number will follow the same set of rules as listed above for number swaps. Numbers that fail all the checks will not be allowed to be imported.

Toll Free numbers will be labeled as Toll Free for the carrier name, regardless of how they are entered.

DID Checks prior to Aging

DID Assignment for Primer Seats

A DID is assigned to Primer seats for use with 911 calling as well as local calls. Previously the DID was assigned from a pool of numbers and wouldn't always match local rate centers for local calling. Now, the ability to swap the DID assigned to a primer seat has being added.

Changes have been made to the Features & Services widget in the Customers tab to aid in loading data for much larger customers. Previously, prior to showing any data, all details of every service the customer had was loaded. This could result in significant delays when customers had 1000+ services in their PBX. To handle these larger customers and still be usable for smaller-to-midsize customers, only the first 10 services items are loaded. This appears as the same functionality as today, but the other pages of data are not loaded until you attempt to page through them.

Since the data is not loaded until you access the specific page, the live filtering feature has been removed. The live filtering depended on all the data for all features and services loaded to be able to search through the data without returning to the server. Additionally, the column sorting is still in place, but only works if you do load all the data by paging through each tab.

The filters provide a quick way to pull back smaller subsets of data or find the specific user you are looking for rather than paging through all the data.

The ability to enable encryption - SIPS for encryption of SIP signaling, SRTP for secure RTP -  is being added to this release and is currently supported on the Poly VVX 150, VVX 250, VVX 350 and VVX 450 devices. Encryption is useful in cases where customers are concerned about voice communications going over the internet. Encryption helps protect these calls against attempts to intercept the voice traffic. The feature can be purchased via Atlas like any other feature via Add Products.

The feature can be enabled for ordering and the pricing can be set within the Partner Setup, Products and Services tab on the Secure Voice feature. Each license purchased can be applied to an x50 device in the Customer Administration Portal once order processing is completed. You need to order an equal number of licenses to x50 phones if you want all of the devices to be encrypted. Once applied to a device, all communication to that device will then be encrypted. The Features & Services widget will show the purchased Secure Voice services and their current assignments, as well let you cancel the services.

Did this answer your question?